Shaw first became interested in the teachings of Henry George in 1949 when a close friend told him that Progress and Poverty was his favorite book.  Shaw bought a copy of George’s masterpiece the following year and enrolled in the Fundamental Economics course offered at the Henry George School of Social Science in Highland Park, MI.  In September 1951, Shaw enrolled at Wayne State University as a Music Education major, but elected to take Economics 101 his first semester.

Also in 1951, Shaw, a member of the Congregational Church, appeared before his local Draft Board to request designation as a conscientious objector.  He was conscripted one month after his graduation from Wayne State in July 1953.  Shaw completed his basic training at the Medical Replacement Training Center (MRTC) at Camp Picket, Virginia where he also participated in the MRTC Band.

Upon completing his training, the U.S. Army sent Shaw to the hospital at Camp Truscott, Glassenabch, located three miles from Salzburg Austria.  Shortly after he arrived in Austria, Shaw was reassigned to the 49th Army Band where he served the remainder of his assignment.  While in Austria, Shaw completed music lessons at the Mozarteum in Salzburg.

Following his honorable discharge June 25, 1955, Shaw moved to Vienna and enrolled as a full time music student at the Academy of Music.  In July 1956, he returned to Detroit and pursued a master’s degree in Instrumental Music Education from Wayne State University.  From 1958 until 1964, Shaw worked as a public music school teacher.

In July 1964, Shaw served in the U.S. Military Academy Band at Westpoint, N.Y.  Following his discharge in 1972, Shaw and his family moved to West Virginia where he worked for a short while as a real estate appraiser in the West Virginia State Tax Division while also completing several courses in Appraisal and Assessment Training. 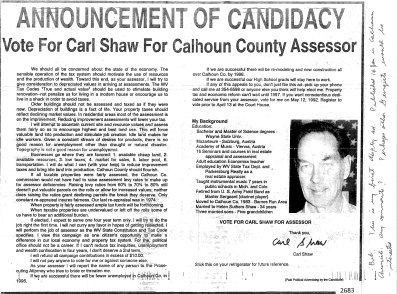 Shaw retired in 1983 and has since remained active in the movement to promote land value taxation, through speaking engagements, letter writing, and publication.  In 1992, Shaw ran unsuccessfully for Calhoun County Tax Assessor vowing to “cooperate and work with the Calhoun County Commission to set correct valuations and reasonable tax rates which will provide sufficient revenues without hurting taxpayers.”  In 2015, Shaw published Progress and Poverty for Out Time, adding important paragraphs, chapters of biographical importance, colored charts, pictures, and a glossary” to George’s famous work “in an attempt to make understanding easier for the student.”

To access any of the books Shaw recently donated or to schedule a tour of the Henry George Birthplace, please contact Director Alex Lough at awlough@hgsss.org.